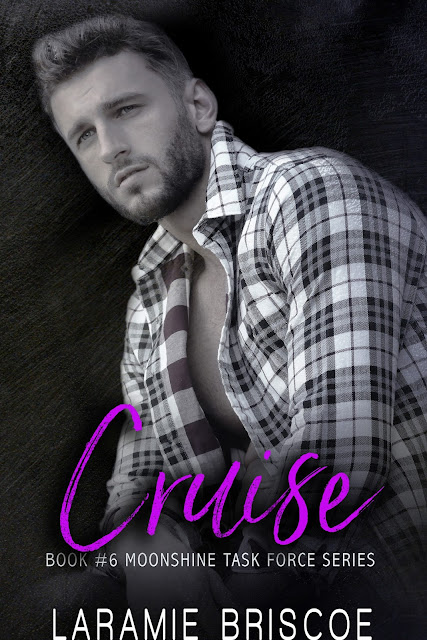 The kid is now a man, and he’s got something to prove…..

All my life I’ve looked up to my Dad, there’s nothing I ever wanted to do more than be a member of the Moonshine Task Force right next to him. I said no to playing football professionally to stay in Laurel Springs and fulfill my dream.

I’m biding my time, paying my dues, and soaking up any bit of information my fellow MTF members slip my way. To most of them I’m the kid they watched grow up, and while they’re proud of me, they don’t take me seriously.

Life is status quo until the morning all hell breaks loose in our small town
threatening everyone I know and love – including the one woman I can’t get out of my head.

“My favorite place? In his arms……”

Caleb saved me from the worst date of my life, swooping in like the fixer he is. Smiling his panty-melting grin, he grabbed my hand, and extricated me from the longest ninety minutes known in the history of the world.

Instead, he took me on the best date I’ve ever had. We’ve been inseparable since that crazy night.

It hasn’t been picture-perfect. His job is dangerous, it worries me, even when he tells me not to. One gorgeous summer day, it all comes crashing down on us.

The man who has my heart is in the middle of a FUBAR situation that has no good ending. My hope is, when the smoke clears Caleb walking towards me, arms out-stretched, with that grin on his face, before he envelopes my body into the hug only he can give. 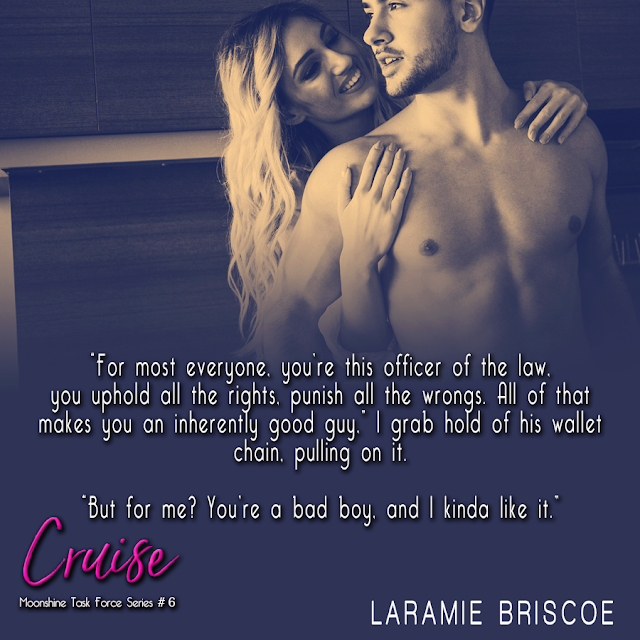 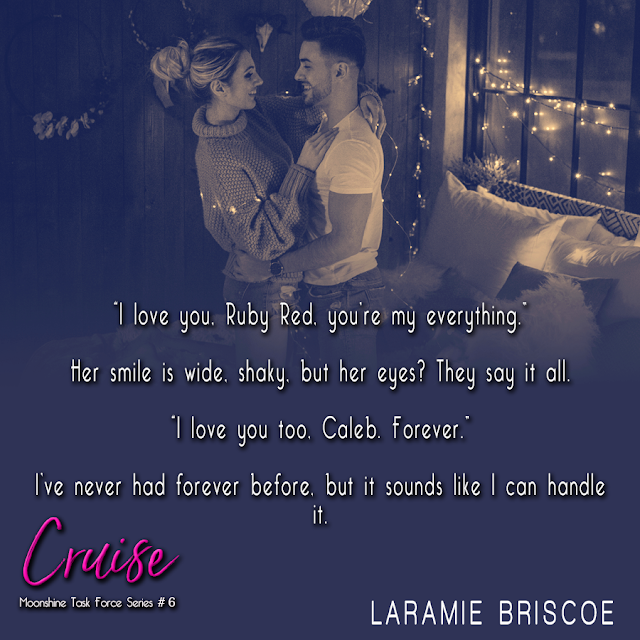 Review
Cruise is the last book in the Moonshine Task Force series and what a fabulous ending. I’m sad to see this series end.

Caleb aka Cruise has grown up in the series and now a man following in his father’s footsteps he is now firmly established as one of the crew. He has always looked up to his Dad, Mason aka Menace and the two are more like best buddies than father and son with only sixteen years between them. Not being the typical drop out, Caleb has been a model son with a few blips in his teenage years so it was now great to see his story as a man.

When Caleb see the young woman being verbally abused by her date in The Café, Caleb steps in then sees Ruby home. From then on both Ruby and Caleb get closer and then finally they develop a relationship which goes from strength to strength. These two have an instant attraction and the heat quickly rises from early on. His ‘Red’ gets him totally and understands his need for a little more dark as he understands this beauty is hiding a sexy depth under all her blushes.

This was a wonderful read with minimal angst and no silly misunderstandings to get in the way of a simple but sexy romance. It was amazing to catch up with all the MTF men and their families, especially Mason and Katrina. It was kind of like an extended epilogue of Menace and Rina with Kelsea who happen to be Cruise’s parents and little sister. It was a good feel factor read and so heart-warming but filled with some hot passion and chemistry.

I have loved this series throughout and I was a little apprehensive when I found out the last book was going to be Caleb as I’m not a fan of  ‘new gen’ books of a series. However I needn’t have worried as everything was so believable and great to see how the others had progressed in their lives. A wonderful cast of characters that I took to my heart and I will be sad to see them go but a series that is great to go back to and do re-reads when having a book hangover. Oh yes like now! Five stars. 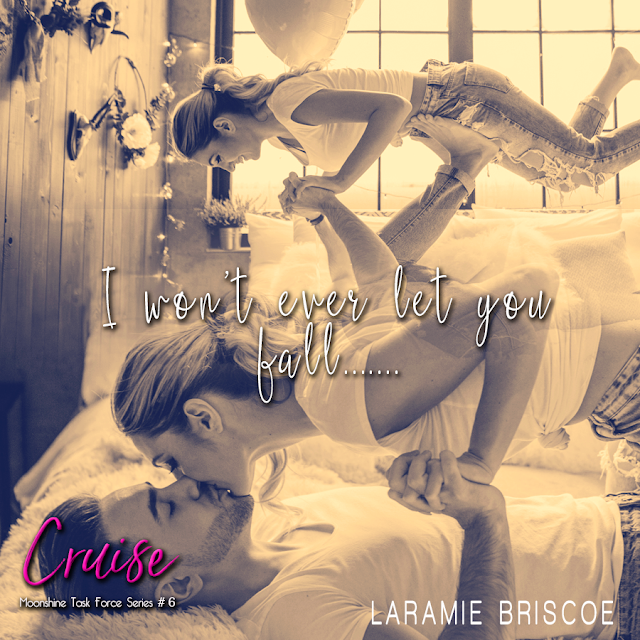 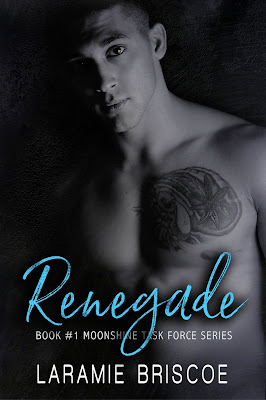 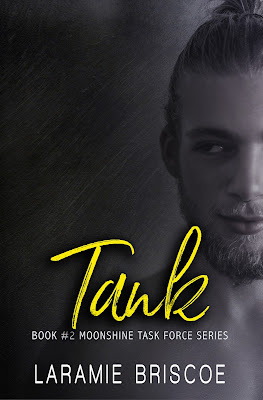 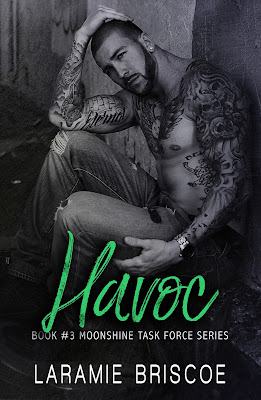 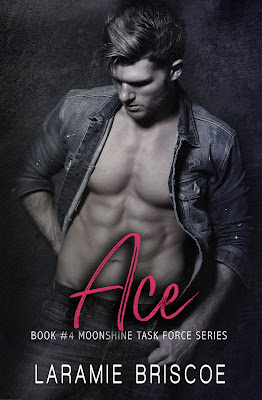 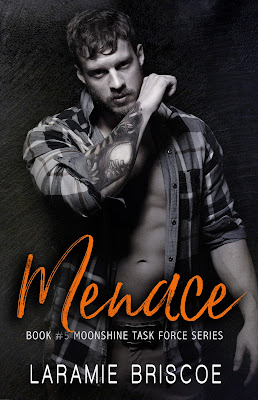 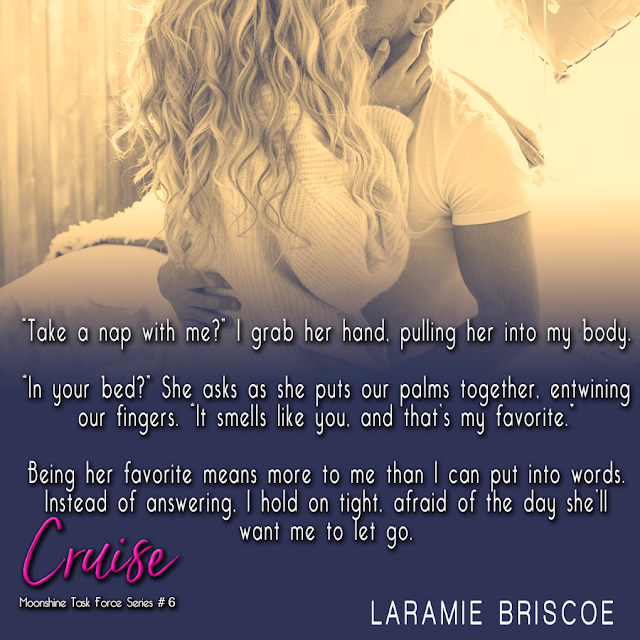 Laramie Briscoe is the best-selling author of the Heaven Hill Series and the Rockin' Country Series.

Since self-publishing her first book in May of 2013, Laramie Briscoe has published over 10 books. She's appeared on the Top 100 Bestselling ebooks lists on iBooks, Amazon Kindle, Kobo, and Barnes & Noble. She's been called "a very young Maya Banks" (Amazon reviewer) and her books have been accused of being "sexy, family-oriented, romances with heart".

When she's not writing alpha males who seriously love their women, she loves spending time with friends, reading, and marathoning shows on her DVR. Married to her high school sweetheart, Laramie lives in Bowling Green, KY with her husband (the Travel Coordinator) and a sometimes crazy cat named Beau.