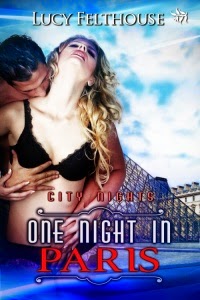 Jacob is nearly forty, and has recently come to the sudden realisation that he’s not doing much with his life. Sure, he’s got his own successful business, but what’s the point in earning lots of money and not doing anything or going anywhere to spend it?

He’s in serious danger of being all work and no play, so he starts to rectify this by organising a twenty four hour layover in Paris en route to a meeting in Dubai. Whilst there, he goes on a bus tour of the city, and there meets Annabelle, a fellow Brit who’s studying in Paris. There’s clearly an attraction between the two of them, so when the gorgeous Annabelle makes an indecent proposal to help Jacob fill his time in Paris, who is he to refuse?

Jacob huffed out a breath as he reached the kerb, shooting a dirty look at the motorist who’d caused him to leap for the relative safety of the pavement. Christ, he’d heard talk of Parisian drivers, but until he’d experienced the place for himself, he’d thought the claims were exaggerated. Apparently not.

Running a hand through his hair, he tried to regain some modicum of composure. It was not the best start to his day—all he’d done was catch the Metro to the Eiffel Tower so far, and he’d barely caught sight of the iconic monument before an insane motorist had almost run him down.

Checking his pockets to make sure nothing was amiss, he retrieved his pre-booked ticket for one of the hop-on, hop-off bus tours of the city while he was there.
Horribly touristy, he knew, but given he’d never visited the French capital before, he felt it was excusable. Hell, he’d even booked a plane ticket with a nice twenty-four-hour layover so he could sneak in some sightseeing. It was going to be non-stop work when he got to Abu Dhabi, so he felt he was entitled to a little chill-out time before he got there.

He was the boss, anyway, so nobody could tell him what to do, where to go, or when. If he wanted to head for a brief jolly in Paris before a bunch of intense meetings with his Arabic clients, then he damn well would. What was the point in working his arse off constantly if he couldn’t reap the benefits? His fortieth birthday was approaching and the realisation had made him think. Almost forty and he hadn’t seen nearly enough of the world. Especially if you discounted hotels and conference rooms. Once, he’d flown to Rome, had a meeting in a hotel near the airport, then turned around and boarded a flight home. It had been worth it financially, but only months later, it hit Jacob what a colossally wasted opportunity it had been. Yes, the client had insisted on a face-to-face meeting, rather than a Skype chat, and yes, he’d needed to get back home to continue with yet more work, but it could have waited a day or two. Even a couple of days in the Italian capital would have been better than nothing.

What was the point in having plenty of money if one couldn’t enjoy it, after all?
With a decisive nod, Jacob checked his ticket for the location of the bus stop. He’d just headed for the Eiffel Tower in the first instance because he’d figured it would be the easiest thing in Paris to find. He’d been right in assuming that; the mighty iron structure pierced the sky, impressive and strangely beautiful. It was next on his list, after the bus tour, which he felt would help him get his bearings. He only had twenty four hours—there was no time to waste getting lost.

He quickly located the bus stop he’d been looking for, helped by the vehicle that had just arrived, emblazoned with the tour company logo. There was already a group waiting, and he hurried over to join the back of the queue. After a couple of minutes, it was his turn to have his ticket checked, then he was ushered onto the bus.

It seemed the majority of people who’d alighted in front of him had snagged seats on the bottom deck. It was far from full but somehow already felt crowded, so Jacob headed up the stairs, the child in him making a bee-line for the back seat.
He’d taken a couple of long strides when he saw someone already sitting there. A blonde, maybe a decade younger than him, and gorgeous. Their gazes met and they exchanged a polite smile before breaking eye contact.

One Night in Paris is part of the City Nights series but is a standalone read.

Jacob is a hard working businessman who upon nearing his fortieth birthday feels life is passing him by without him being a participant and as such decided to make a short detour in Paris on his way to Dubai and take in the sights. It is when he hops on a tourist bus that he meets gorgeous blonde, Annabelle.

Annabelle is a fellow Brit, but she lives in Paris whilst she is studying Cordon Bleu. Like Jacob she finds little time to herself and is taking a rare day off to catch the sights of the city.

Both hit it off and decide to spend their day together, it’s over a quick lunch that things steam up when the discussion of what to have/do for dessert comes up.