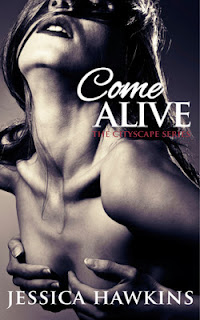 Second book in The Cityscape Series

The second book in the Cityscape series, Come Alive picks up three months after Come Undone, the first book, left us with that explosive cliff-hanger.

Okay so Olivia drove me crazy in Come Undone but through this book I wanted to strangle her! I kept shouting “Open your eyes woman!” “Stop being a martyr!” and other more expletive stuff. I felt physical and jaw dropping dread thinking Liv was not going to do what was right for her but she continues for the most part on her “what is expected of me” track. So frustrating! And there in the wings is David. Giving her space to do what she feels she needs to do but does that make it right? NO!

I’m glad I was proved right with my first impression of Bill, the husband. He continued to be so much the wrong man for Liv. Not that he wasn't nice or kind because he was. Yes Liv loved him but was she in love with him? NO! It was so obvious but she kept digging herself in that well paved route of doing what she should do not what she wants to do.

Jessica has continued to develop the characters more insightful as this book was a whole lot darker and intense that the first book but still as angst driven. I could actually feel the quandary that Liv was going through but she sure as hell pushed the boundaries of self-preservation. How could she think she was protecting her heart when it was quite clear to the reader she was smashing it to pieces. Yes I know infidelity is not an easy subject to agree with but in some cases staying in a place that is not right for you surely alleviates the need to move the flip on!

David continued to grab my heart but even more so in this book as the reader was given further insight into his own demons and how utterly in love he was with Olivia. The ultimatum he gave near the end had me blown away and shouting NO! How could Olivia not see how right they were for each other? She confides her every thought and feeling with David but cannot tell her own husband anything. David is always looking out for her and notices the minute change in her yet Bill doesn't even notice when she has stopped eating?

The meet up at the friend’s wedding brought everything to a head (in more ways than one for David!) and Liv knows her resolve has to be one way or the other. She cannot keep pretending to either her lover or her husband.

There is a HEA, albeit a short one and I thought I was heading for another cliff-hanger but no we find out who she has chosen and what an emotion packed chapter that was. Brilliant!

I would not have been entirely satisfied with the ending if I had not been aware there is a third book in the series due in late 2013 so we will find out further what happens to Liv, David and Bill. I have loved this series so far so I for one cannot wait. Bring it on!