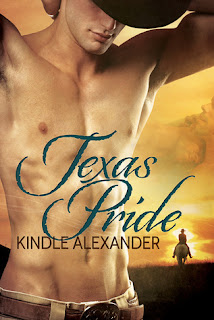 
I had total cover love (yum) and the blurb was a winner – well hot movie stars and cowboys needing a shove out of the closet? Yep that’s for me!
This book was fantabulous from the first page leading you from one world where fame and the trappings of that fame make for a life unfulfilled to a world where freedom to be who you are and finding the other half of your soul is.
Austin Grainger is at the top of his game and an adored movie star. But Austin wants out of this fake life with his fake fiancé and hangers on, he hankers for his old life back in Texas and a memory of one hot glimpse in the school showers. He needs to be free to be his true self without his every move being covered by the paparazzi and where better to do that than the wild open plains of Texas?
Kitt Kelly is a local Texas ranch owner, pulling the family business back from the brink of failure from where his father had run it to before his death. So now Kitt finds himself working the business back up, taking care of his step mom and two sisters but hardly any time for himself.  That has to wait to his twice monthly secret “hook ups” in Dallas of which he has no intention of letting anyone know the truth behind these. He lets the town think he is too busy for the women who throw themselves at him at the local bar. If they ever found out about the true Kitt his business would be ruined. Or would it? Kitt is so far in the closet it is sealed shut with superglue. But then Austin Grainer turns up to be the person who has bought some land from him and is now his new neighbour.  Yep, his secret crush he has had since he was in school is back in town!
I adored these MCs, with Kitt and his insecurities and Austin with his taking no nonsense from anyone – they just worked well opposite each other. I loved when Austin played detective and found out that Kitt was gay; there was no stopping him getting his man! Oh and when he saw the underwear, which was a pure giveaway! That scene was so hot – Kitt furious as hell, standing there in his low slung jeans, showing off his tight abs and Andrew Christian underwear, not taking any shit from anybody- oooshk! Get at it Austin!
I did feel some parts were a little over generalised and more could have been written – for example their first night together when they both found they were gay and wanted the same thing. This could have been elaborated more and a whole chapter of hotness could have been developed on their first explosive night together but the reader only got a quick glimpse and then told in general terms what had gone on. However, the relationship grows stronger with them both agreeing they were “exclusive” but then the tabloids got hold of the story  for their own exclusive forcing Austin to take a risky decision. Oh and the way the HEA was written made up for missing their first night. I “flippity flopped” at the epilogue – wonderfully done Kindle!
Kindle Alexander is a cross genre writer and as I am a cross genre reader; she is totally on my radar. I’m so glad she was and I did not miss out on this book. I adored it and want more Kitt and Austin. I have a severe case of book hangover. Seriously readers – you need to read this book. Ten stars for me!
Posted by Foxylutely