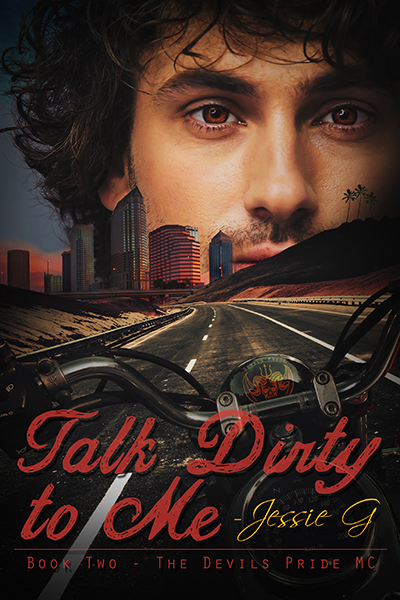 It might be mine and Greg’s birthday, but you’re getting the present. If you haven’t read Talk Dirty to Me, you can find it on all the retail outlets, and stay tuned for future books in the Devils Pride MC Series. I have a feeling we haven’t seen the last of these crazy love birds. Jessie G

June 4, 2016
It was barely dawn when Greg picked his way around the boxes piled up in their new living room and headed for the kitchen. They’d returned to Florida a few months ago and had been shacking up in a furnished month-to-month rental while they waited to close on their new house in Naples. They’d finally gotten the keys a couple of weeks ago, the painters and cleaners had done their thing, and he was so relieved when the movers delivered all their belongings yesterday.
As much as he loved their big adventure, Greg hadn’t really felt like they were building a life together until they signed off on a thirty-year mortgage and a house in Naples. This was their home and he was itching to start blending their belongings, like that would be proof they were committed to the long term. Maybe that was ridiculous all things considered, but it was how he felt.
Greg didn’t think they had that much—his old apartment hadn’t been large and Gene had been living under cover for years—so he didn’t know how the hell they’d filled up so many boxes. Luckily, he’d been smart enough to pack the coffee pot and supplies in a box that was marked on all sides in big bold letters. It seemed fitting that he would unpack that box first and he started up a pot before setting up his little coffee station. He’d probably rearrange things ten more times before he was satisfied, but for now he was thrilled to see that little spark of life in the otherwise barren space.
“Couldn’t sleep?” Gene’s early morning grumble made him instantly regret getting out of bed. After more than a year together, he still couldn’t get enough of his big, bad biker and he knew the feeling was mutual.
“Sorry, the boxes were calling me.” Greg glanced over his shoulder and smiled when he saw that his man was still naked. They didn’t have blinds or curtains up, but his man didn’t have a bashful bone is his body. Not that he had any reason to, Gene was worthy of being on display and Greg realized he wasn’t jealous of anyone who looked. They were human, they couldn’t help themselves, and it gave him a thrill to know that Gene was all his. Boy had he come a long way.
Strong arms came around him and Gene pouted as he propped his chin on Greg’s shoulder. “Guess you’re not interested in a little first-morning-in-our-new-house-nookie, huh?”
“Technically, we did that a couple of hours ago.” And a couple of hours before that and last night before they passed out and right after the movers pulled out of the driveway. Not that he was complaining at all!
“I wasn’t aware we were on rations now.” Gene made a derisive sound as he slipped a hand into Greg’s shorts, found his growing erection, and squeezed. “But you go right ahead and watch the coffee brew.”
Gene didn’t know the meaning of fair play. Trapped between the counter, that hard body, and his own bad decision, Greg could only stand there as Gene leisurely stroked him. It wasn’t nearly enough to get him off, but more than enough to wonder when or even if that would happen. His lover liked to tease, liked to draw out the finale, and normally Greg liked when they edged each other until they were both crazy for it.
Usually he broke first and Greg was okay with that. Hearing him beg always flipped a primal trigger in


his lover, taking him quickly from gentle Gene to aggressive Snake. It was a combination that never failed to completely destroy him in the best possible way.
“There are still some things in the box.” Gene nuzzled beneath his ear, his warm breath making him squirm. “You shouldn’t stop what you were doing on my account.”
Not knowing what game Gene was playing, but eager to find out, Greg tugged the box closer and stood on tip toe to see inside. Immediately, Gene’s was tugging down the back of his shorts just enough to slide his hot, hard erection between Greg’s legs.
He instinctively shifted his stance, squeezing his legs together just as he felt a gentle nudge against his balls. Gene was quick to lock him place, bracing his own tree trunk size legs on the outside of Greg’s, and using his free arm to keep them together. All the while, he kept up that leisure stroke, and matched it with an unhurried thrust. It was crazy torture to feel Gene’s cock sliding between his legs like that and the confinement of his own skewed shorts and Gene’s big body were only making it worse.
Greg looked over his shoulder, needing to see the look of desire on Gene’s face. He no longer doubted that desire was really for him, and seeing it for what it actually was only made it hotter. Gene smiled knowingly and curled tighter around him, taking his mouth in a messy kiss before nudging him back just an inch.
“Did you find my Superman mug?” When he just blinked in confusion, Gene’s smile grew. “You’re the one who wanted to start unpacking.”
With a grumbled curse, Greg forced himself to focus on the box and was instantly rewarded. It seemed that with every unpacked item, Gene’s movements increased in speed and strength until they were both frantic. Greg was teetering precariously on the edge and knew he’d only get what he needed by completing the seemingly inane task.
The simple blue and red mug was nothing more than a cheap knockoff, and it wasn’t even Gene’s favorite. If this wasn’t so obviously a sex game, Greg might have thought to ask why it was important. As it was, any kind of logical thought went out of the window the minute he saw Gene naked.
Gene ground against him, hips jerking and hand flying, and Greg suddenly didn’t care if he had to break everything else in the box to get what he needed. Mugs and tins rolled dangerously across the counter as he practically tossed them aside in his quest until finally, with a triumphant shout, he held the mug up victoriously.
“Found it!” The words were nothing more than a stutter when Gene slammed hard against him. Greg scrambled to brace himself and watched in fascination as the mug tumbled out of his hand, bounced a few times, and broke against the granite. It shouldn’t have been important, shouldn’t have penetrated the sex-fog, but there was something else there. Something that had Greg reaching out.
Gene grabbed a handful of his curls and yanked him back, taking his mouth in a savage kiss. All thoughts of mugs or anything else evaporated, and Greg felt his orgasm right there…right fucking there. “Gene!”
There was an answering shout, the jerk and shudder as they found their release, and a gentle whisper that took their sex game to a whole new level. Greg was still trying to catch his breath, still trying to process what he thought he heard, when Gene reached around him to grab the strange item that was in the Superman mug.
As it slid across the counter toward him, the shape of the little box becoming more distinct, Greg felt himself breathless for a whole other reason. Could this really be happening?
“I was going to wait until your birthday, but it seemed more fitting to do this on our first official day in our new home.” Gene spoke softly, his words completely confident, as he lifted the lid to reveal the rings inside. “You saved me more times than I can count, loved me even when you didn’t believe it was possible, and have made me happier than I’ve ever been in my life. Say yes.”
Greg looked between the rings and Gene’s face. All the emotion he needed was right there for him to see, to feel, and to believe, and there was no question of what his answer would be.
© 2016 Jessie G Books, Inc. Unauthorized use and/or duplication of this material without express and written permission from the author is strictly prohibited. Excerpts and links may be used, provided that full and clear credit is given to Jessie G and Jessie G Books, Inc. with the appropriate and specific direction to the original content here at Foxylutely Books.

Author’s Note
I hope you enjoyed A Birthday Surprise with Snake & Greg in the 7th installment of my #13months13scenes tour. The guys from Sizzling Miami, Devils Pride MC, and The Forgotten Soldier series will be appearing on different blogs throughout 2016 with little slice of life moments like this.


Did you miss a previous installment?

Mark your calendars, there are still 6 more installments to come!