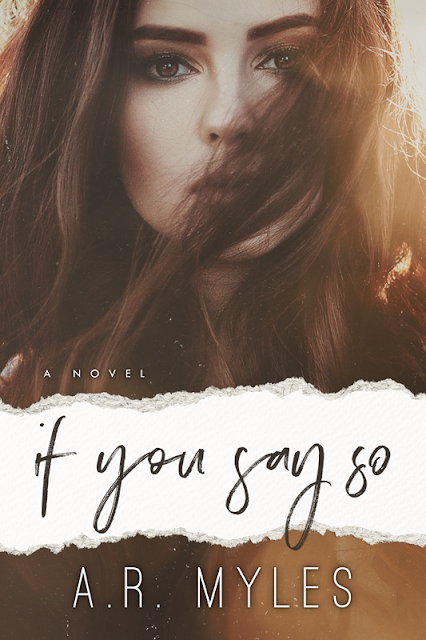 Sometimes life is a dream you don’t want to wake up from . . .

The night Alison Lockhart walks in to Undisputed, she only wants to have a drink, celebrate a friend’s birthday, and forget about the newest guy her mother tried to set her up with. It's why, when the infamous Jay “The Hurricane” Hamilton—one of the highest-ranking boxers at The Underground—labels her a ring rat, she writes him off as just another guy with an over-inflated ego.

Only she can’t stop thinking about him.

Or his steel-blue eyes.

Or the apology on his perfect lips.

Their fall is fast and hard, but when Alison’s ex shows up and Jay starts keeping secrets, will they be able to find their way out of the nightmare? 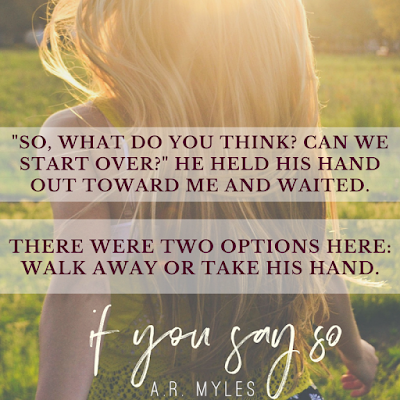 His body was a temple. A beautiful, perfect, glorious temple.

I felt Hollie nudge my arm, and when I looked at her, her brown eyes were dancing with amusement, and there was a shit-eating grin spread across her face. She leaned close. “Love, you have a little drool, right here,” she whispered, wiping the corner of her mouth.

I scoffed and rolled my eyes as Vince asked, “Ali, have you guys met yet?”

“Hamilton,” I said around the flips that invaded my stomach. “I know who you are, I’ve seen you fight.”

He scratched his jaw. “Oh yeah, is that so?”

His chest shook with a half-laugh, his face smug and his eyes full of skepticism as his eyes flicked to my perfectly styled strawberry-blonde hair, my expensive-looking clothing, the diamond studs in my ears, and then back to my impeccably made-up face. “I somehow seriously doubt that.”

I knew exactly what he was thinking: stuck-up little rich girl. That was just the part I played for my mother. It wasn’t who I was. To guys like him, there was no way a good-looking girl who looked like she came from money enjoyed watching sports or went to The Underground for any other reason than to pick up a guy.

I rolled my eyes and dismissed him by turning my attention to the hockey game that was on the television behind him. My team was up by two with fifteen minutes left to play, but no matter how much I tried to ignore him, I could feel him watching, waiting for me to say something that would out myself as being what he thought I was, a ring rat.

I made him wait a little longer before I sat taller and crossed my legs, my hands resting on my lap. “Jay ‘Hurricane’ Hamilton. You have one hundred and forty-eight wins, twenty-six—no, wait, sorry, twenty-eight knockouts. You are currently sitting second behind Delgado, who’s really giving you a run for his money, though, in my opinion you could and should be first.” The confidence oozed in my voice, thick and heavy with every word.

Everyone had turned to look at me, a few curious as to what was going on, but the people who knew me were all wearing grins. I wasn’t some pretty ring rat. When it came to most sports, I knew my shit, and I knew it well.

My love and knowledge of all things sports came courtesy of my dad. He was the one who made sure I learned everything I needed to know at a young age, and growing up having whatever free time we could carve out, we spent it in his office watching Sportsnet or going to whatever game he got us tickets for. It was the one thing that bonded us so closely together—something my mom hated, more than carbs.

Hollie chuckled beside me, and Derek let out a breath, saying, “Shit, now you’ve done it.” 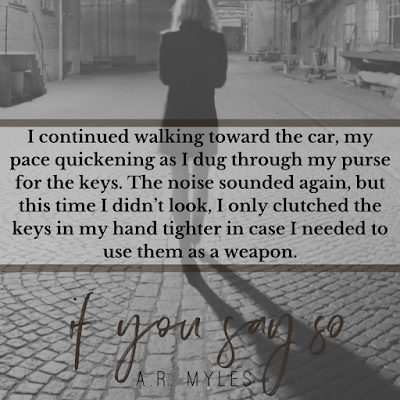 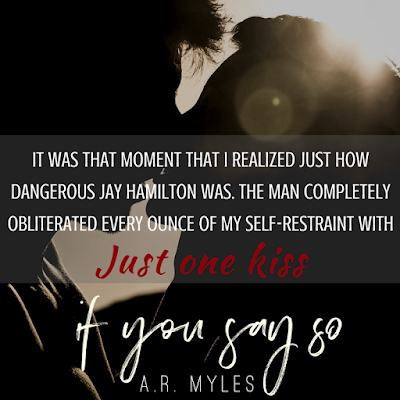 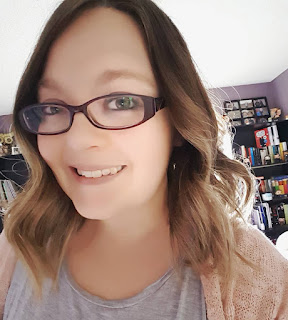 The author of the Breathe Again and Blinded by Love series, both written under the pseudonym, Emma Grayson. If You Say So is my debut novel under A.R. Myles and my first standalone novel. I’m currently working on a few new novels as well as a new series, which is focused on single moms who are trying to make it in the dating world after being wronged by their loser exs.

Born and raised on the outskirts of Edmonton, Alberta, I reside in a small town with my family, my eleven-year-old son, and six cats. I love my romance with a twist of suspense, and when I’m not writing or reading or coming up with new plots, I spend most of my time binging all the shows on Netflix and drinking Starbucks coffee with my mom and best friends. 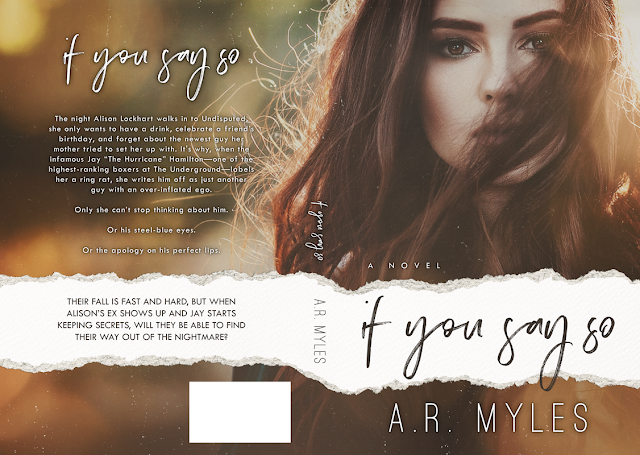