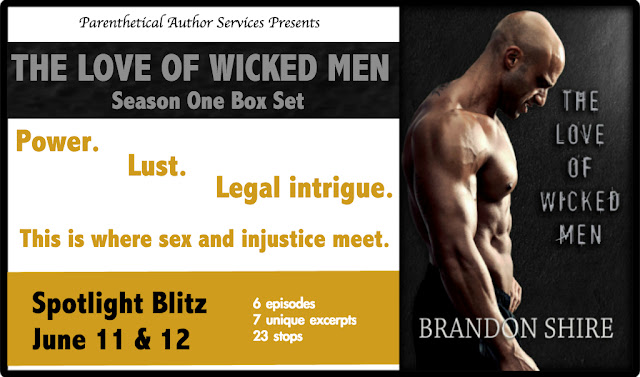 Message from Brandon Shire
First, let me say thanks for hosting the Wicked Men blog tour. The creation of this lengthy novel was quite an adventure. Throughout the course of writing each episode, readers were offered the opportunity to give their input and suggestions on how they thought the story should move along. And I threw in a few twists and surprises along the way, just to keep them on their toes. The Wicked Men blitz features seven unique excerpts, so don’t miss any. And don’t forget to enter the giveaway! 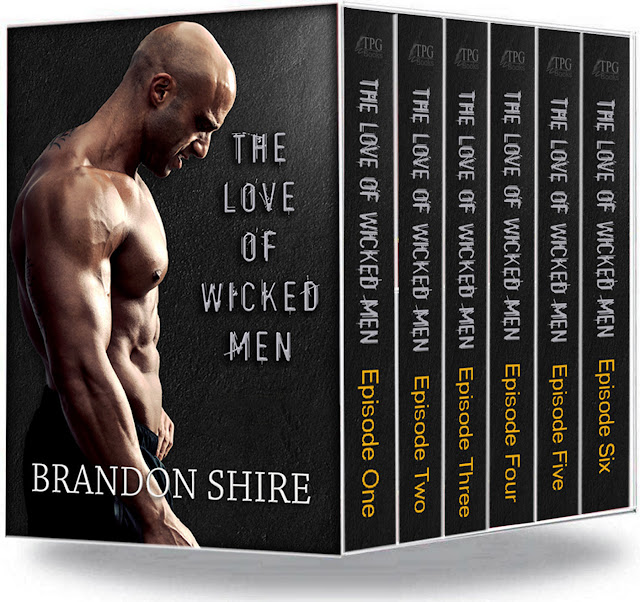 Sid Rivers and Jack Brown are two sides of the same coin. One is a lawyer with his own firm and dreams of money and power; the other is a criminal with a lengthy record and a quest for vengeance. When they meet, sparks fly. But was their meeting an accident? Or was it planned by the billionaires who want to control their destiny?

Sid pressed a button on his desk and Cheryl opened the door. “The builders are here,” she informed him. “Anything else for today?”

“How do we look for tomorrow?” Sid asked.

“I’ve put everything on your calendar,” she answered, edging towards the door.

He saw Jack over her shoulder with two other men and dismissed her with a wave of his hand. He beckoned them in as Cheryl left.

“We’re ready to get started,” Jack said as soon as he came in.

“Did the receptionist give you the keys and codes for the security system?” Sid asked. All three of them were wearing tool belts, jeans, and blue t-shirts with an indistinct logo. They looked more like Chippendales than construction workers – chiseled jawlines, tanned skin, hard bodies with well-developed muscles. Even Cheryl’s decrepit old ass had given them the once-over on her way out.

“Bill and Marcus,” Jack said, indicating the two men behind him. “Most of tonight, we’ll pull down walls and make a mess. It should be cleaned up by the time you get here in the morning. Tomorrow, we’ll bring materials in and start the actual construction. Take about a week, more or less.”

Sid nodded, distracted by the light sheen of moisture that seemed to be covering Jack’s upper body. Was it that warm outside? he wondered as a whiff of Jack’s cologne wafted across the desk and made his cock twitch. “Yes, that sounds good.” Sid sat forward, almost leaning into the scent of the man in front of him.

There was something in the chemistry… Sid didn’t know what the cologne was, but it was driving him fucking crazy. He knew someone else whose cologne had the same effect. He realized, with chagrin, that he was getting hard under his desk like a damned schoolboy. “Yes,” he said to himself more than to any of them. His eyes flicked to the two men flanking Jack. He noted their expressions, cleared his throat and sat straighter, tugging on his tie. “What about the security system we discussed?”

“Carl will be here later with the specs and the estimate. Should I leave them on your desk?” Jack asked as he turned to leave. The men behind him took Jack’s cue and went down the hall, toward the receptionist’s area.

Sid’s eyes dropped to Jack’s ass as he walked away. The man was fucking mesmerizing, and knowingly making a performance. Jack turned and caught Sid staring.

There was a restlessness in Jack’s eyes, and it took Sid a moment to realize what it was. It was the same unadulterated lust that had hooked Sid in the convenience store. Sid’s eyes flicked to his monitor, and away from the certainty in Jack’s gaze. “That’s fine.” He tried to be cavalier but failed.

Jack didn’t move. He stood there watching him, his demeanor dangerously sexual within the confines of the office.

“Was there something else?” Sid asked, trying to ignore him.

There was a pause before Jack answered. It was long enough that it brought Sid’s eyes back to Jack’s face.

“No.” Jack colored slightly. “Well, maybe.” He shuffled his feet for a moment and looked away. “Is there someone at home?” He looked at Sid directly for the answer, his eyes holding another electric jolt of curiosity and desire. When Sid didn’t answer immediately, he whirled for the door. “Never mind. You don’t have to answer that.” He walked out and closed the door behind him.

“Jesus Christ.” Sid let out a long breath, begging his cock to go back down. He had to fuck this guy, and soon.

Buy direct from Brandon and save $1 with coupon code ilovemen at checkout!


Also available at the following retailers:

*Complimentary copy provided by the author in exchange for an honest review.

Well this was certainly a unique experience and kept me on the edge of the sofa whilst gripping my kindle tightly, flicking the next button as fast as I could. I knew as this was a Brandon Shire storyline it was not going to be a sparkling unicorn’s tale of fluff but this book still took me by surprise.

It was a gritty and had an in depth plot, with characters you loved to hate and hated to love. Yes you know the type – those that grab you by the scruff of the neck and stare you down to get reading. Well this was one of those gripping reads.

The episodes were released separately which I read one by one but then when the boxset was available I just had to do it all again, in case I missed something.
I won’t divulge the plot or let slip any spoilers, needless to say I shall leave that enjoyment to the new reader. All I will say is Sid and Jack in that last scene? Smoking!

This was an all-encompassing read with plenty of intrigue, intensity, suspense and hot lusty sex. Everything to engage the reader in an amazing read.

Great stories should not depend on gender or sexual preference of a character, but instead upon the strength of the characters and the honesty and urgency of the story.

Regardless of the differentiation above, Brandon writes for people who enjoy being challenged, and for those who strive to understand situations they don’t typically encounter. He pens raw, emotional stories about characters, which readers will either love or love to hate.

Life and love are pretty damned special, but neither is always perfect. Life can be painful, and real love hard to find. Brandon’s fiction is an exploration of the (sometimes) arduous search for the happiness we all desire.

Using Rafflecopter below, enter to win ecopies of all Brandon’s books or one of five ecopies of The Love of Wicked Men Box Set. Open internationally. Must be 18 years or older to enter.